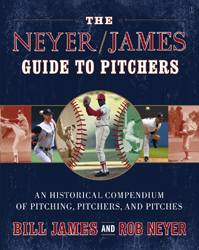 … related to The Neyer/James Guide to Pitchers
The Ghost Pitch

The pitch is like a ghost. People claim they have seen it, but like a UFO or the Loch Ness Monster, the evidence is a bit harder to come across. Jerky video from Japan hides in the depths of specialty baseball discussion boards. Breathless tales from scouts and fans discussing this ghost would be laughable….

If they weren’t true.

Not since the advent of the split-fingered fastball has there been a real “new” pitch. Sure, there are variants like R.A. Dickey’s “Thang” and others that recall Rick Vaughn’s “Terminator,” but the gyroball is not only real, it’s teachable.

The gyroball is less a pitch than an effect. Over the past five years, a new science of pitching is beginning to take hold in Japan. While the translations are non-existent, the best available to me is “Double Spin Mechanics.” Rather than using high-speed video like advanced pitching gurus Tom House and Mike Marshall use, the Japanese have gone to supercomputers.

Simulating various mechanical models, Japanese researchers — and I would name them if I could find someone to translate their book — discovered a series of biomechanical techniques that would remove much of the stress from throwing a baseball. This new mechanical paradigm takes a book to explain properly, but the short version is that instead of using the linear kinetic chain that’s the subject of American research, the Japanese attempt to coordinate two circular motions. The first is a motion of the hips and is very similar to the findings of Dr. Glenn Fleisig of ASMI. There is a nearly one-to-one relationship between hip velocity and ball velocity; increase one and the other increases.

The second “spin” — and this is what’s revolutionary, perhaps — is the motion of the upper arm. This differentiates from Mike Marshall’s Newtonian model and demands a forceful yet controlled rotation of the humerus. To get the idea of this in your head, hold your arm out so that your upper arm (humerus) is parallel to the floor. Have your forearm at a ninety-degree angle and hold the ball so that the ball is between your hand and your ear. The proper second “spin” is done by rotating the upper arm so that the forearm goes from pointing up to pointing down and the hand goes from pointing in at the body to pointing away from the body (pronation) just after the release of the ball.

Double-spin mechanics are almost unknown in America, but slowly they’re reaching these shores. The reason is not the scientific evidence; that remains to be translated and fewer than ten copies of the book have been brought to America. Instead, it is the unintended effect of the new mechanics that is getting the attention. That effect is the gyroball.

In Saving The Pitcher, I state that I don’t believe in the “curveball” as a distinct pitch. All breaking balls are simply the effect of putting some form of spin on the baseball that causes the ball to move off the normal curvilinear path. Secondarily, the spin should be controllable, but that’s not always the case. There probably aren’t ten pitchers in the major leagues that could explain the Magnus force, but most of them have explosive breaking balls.

The gyroball is simply another variation of breaking ball. The same could be said for the slider, the cutter, and even the screwball. Unlike the other pitches, the gyroball does not have a multiplanar path. As the ball leaves the hand of the pitcher throwing a gyro — or as the Japanese call it, the “shooto” — the ball comes off the middle finger with what appears to the batter as a pure counterclockwise spin. There is no snap of the wrist; it is a true “set it and forget it” pitch. The spin is an apparent rifle-like spin that keeps the ball true until it takes a severe, late left turn from a right-handed pitcher.

Let me say that again: the ball comes at the hitter looking like a hanging curve and then takes a hard, flat turn away from a right-handed batter.

Whether you believe in DIPS or not, the effect is the same. First, the batter has a difficult time deciding whether or not to swing. He will have a hard time detecting not only the spin and plane, but since the ball is delivered with a fastball motion, the speed as well. Not only is there no mechanical clue (ideally, of course), but the ball comes in faster than a slider. Assuming the batter does make contact, it is difficult to hit the ball on the sweet spot. Contact usually leads to a weak hit to the opposite field.

The gyroball works well in the confines of a supercomputer, but how does it work on the field? There are several pitchers making use of double-spin mechanics, but there is also a clear star: Daisuke Matsuzaka. The Seibu Lions’ 23-year-old ace throws a 98-m.p.h. fastball in addition to his gyroball, but he is best remembered in Japan for pitching ten innings in an Olympics game while just out of high school. He has lived up to the promise he showed in 2000, but has experienced elbow problems over the last two seasons.

Is this elbow problem the result of throwing the gyroball? Some flaw in double-spin theory? It’s hard to know. While much of the pitching research being done in Japan is on a par with that in America, research on pitch counts and pitcher workload has been ignored. Pitchers routinely throw 150 or more pitches and are asked to throw more in the bullpen after a poor performance. Matsuzaka is reported to have thrown more than 140 pitches ten times in 2002, just before his shoulder problems began. Worse, he had a legendary high-school start in which he pitched a complete game . . . and threw 249 pitches in 17 innings!

Before his injury woes began, Matsuzaka used his two-pitch repertoire to bring the Lions to the Japan Series. He was honored as the Game 1 starter. When both pitches are working, the combination of mid-90s heat and gyroball is all but unhittable. He’s struggled some with control, but generally has had little problem dominating the hitters (there are very few pitchers in Japan who throw as hard as Matsuzaka).

With the return of Bobby Valentine to Japanese baseball, there is hope that the protective influences of American sports medicine will journey east. There is no Japanese word for “prehab,” but work is underway to change that, and in exchange the gyroball will undoubtedly come to America. It may be Matsuzaka — rumors abound that he could be posted after the 2004 season — but a creative team could try teaching the pitch. Just as Boston is doing with the knuckler and Arizona did with submariners, there are advantages to be had in being ahead of the curve. So to speak.

Will Carroll is the author of Saving the Pitcher, which was published this spring by Ivan R. Dee, and he’s also a regular contributor to Baseball Prospectus.