the softcover edition of Baseball Dynasties online, click the links below. Go here if you are interested in buying the limited edition hardcover from Amazon, here from Barnes & Noble. The book is also available at book stores near you.

If you have read the book and have a comment or question about it, please e-mail Rob.

Below are links to a number of articles related toBaseball Dynasties, but not included in the actual book. Some were written by us, some by talented friends.

Max Bishop played second base for the 1929 Philadelphia Athletics … and he also fathered Eddie Epstein’s biology teacher. Find out what happened when Maxine Bishop and Max Bishop’s APBA card collided.

Bill James has taken all fifteen teams from the book, and compared the regulars from each club to the others at their positions. As a bonus, you’ll learn just a little about Bill’s revolutionary new book!

The Strangest Game of Them All

It didn’t get any stranger than Game 4 of the 1929 World Series … unless one watched said game re-enacted by a troop of Cubans, almost in real time, as Scribbly Tate did.

Any number of great teams have failed to win the World Series, and one of them — the 1912 New York Giants — is featured in the book. But what about great teams that didn’t even reach the postseason? Here are some of the best, along with a sidebar on the 1993 National League West pennant race.

The Amateur Draft & the ’70s Dynasties

Baseball America’s David Rawnsley examines the role of baseball’s then (relatively) new Amateur Draft in the construction of the dynastic Oakland A’s and Cincinnati Reds of the 1970s.

The ’61 Yankees are indeed one of the fifteen teams in our book … but should they be? Eddie Epstein’s answer might surprise you.

Scribbly Tate thought we said dreams rather than teams, and the result was something that didn’t quite fit in the book. But the web site? Hey, it’s the Internet. Anything goes.

Did Rickey Henderson deserve his 1990 MVP Award, or did Cecil Fielder get jobbed?

The Weather was Fair

Jim Baker was in New York to celebrate the 1986 New York Mets, and 14 years later he considers the frustrations of a diehard fan faced with his fair-weather compatriots.

So shocking, so much potential damage to the tender minds of the youngsters, that our publishers wouldn’t publish it! Hey, maybe this is what the Internet was invented for. 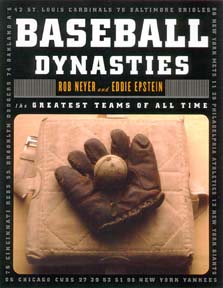 The Greatest Teams of All Time

This is the book that everybody else who writes about great teams, for the next thirty years, will have to begin by reading, just so they know what they’re talking about. Everybody’s got opinions; you guys have got the facts.

Few athletes are part of one baseball dynasty. I was fortunate enough to be part of two. This book captures the unique characteristics that make great teams great.

Baseball fans thrive on arguments. This book will start enough of them to keep the Hot Stove League in session all year long.

If you are looking for some good firewood, then I would highly recommend this book.

— a reader in Louisville, Kentucky

… clearly the smartest and most entertaining book ever written on the subject of great teams.

… The point of all this contrariness is to evaluate the beauty of baseball without getting suckered in by flashy superstars, half-remembered legends, or unprovable “truths.”

Though once again there’s no new Bill James book, Baseball Dynasties … is a very fair approximation … A great argument starter, and the baseball book I’ve enjoyed most this spring.

… [W]e see just how deftly Neyer and Epstein cut through a century’s accumulated mythology, producing one of the few new baseball books to tell us anything about the game.